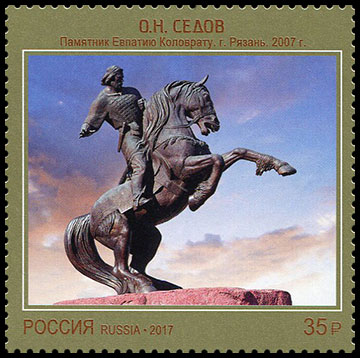 A series of stamps "Contemporary Art" reflects the creativity of contemporary authors that convey the atmosphere of the new Russia, its originality and dynamism, demonstrates the methods and approaches typical of our era in the creation of paintings and sculptural compositions.

On the postage stamp there is a monument to Evpatiy Kolovrat.

Evpatiy Kolovrat (about 1200 - until 1238) - Ryazan boyar, voivode and Russian hero, a hero of the Ryazan folk tale of the 13th century, the time of the invasion of Batu.

The monument, created by the sculptor Oleg Sedov, is a hero on a horse standing on a red granite pedestal. The color of the pedestal symbolizes the blood-stained Ryazan land, whose defender was Eupatius Kolovrat.

The monument was installed on October 18, 2007 in the center of Ryazan on Poshtova Square, located not far from the Kremlin.

The stamp was published in sheets with decorated fields of 6 stamps (3х2). 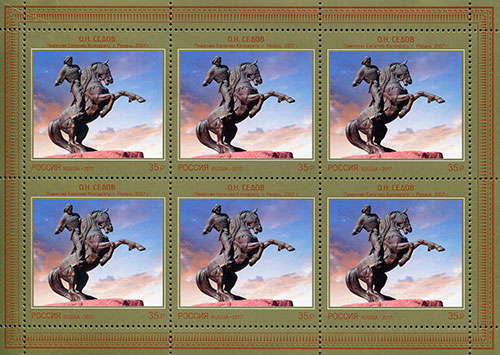