The section is in the stage of constant replenishment. I would be grateful for the sent scans and information.

This section does not claim to be complete and comprehensive, it was created to clearly show the variety of philatelic materials on the topic and become a pleasant addition for philatelists-thematic who do not limit their collection only to postage stamps.

Formally, a postmark is a device used in the post office to cancel postage stamps by applying stamp impressions on them, which confirm the fact that the mail has been accepted by mail, control the route, and so on, and also prevent the reuse of postage stamps. The impressions of such a device are also called postmark and they are the collectible.

Throughout the history of the postal service, there have been a huge number of ways to cancel postage stamps, ranging from cancellation with a stroke of a pen and cancellation by a puncture, to modern mechanical hand or machine stamps and francotypes. There is an extensive classification of stamps according to their purpose and method of application, according to content and form, according to stamp construction, material of manufacture, etc.

For the thematic collection, the following types of stamps are most interesting: 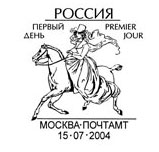 Special postmarks are a collective name for various postmarks that, in addition to standard elements (dates and places of cancellation), have an original drawing and additional commemorative text. Such stamps are made for a specific occasion (anniversary, memorable event, etc.) and have a limited period of use.

Separately, it is worth noting the First Day postmarks, which are developed specifically for new series of postage stamps and are used on the first day of their issue. Many postmarks contain an additional inscription: "First day" in the national language.

The term or "Pictorial postmarks / cancellation" can also be used 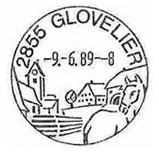 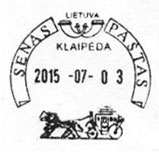 A modern calendar rubber stamp is usually a round stamp with a built-in numerator that allows you to change the calendar date on a daily basis. Standard calendar stamps with a change date are used in the vast majority of ordinary post offices. The main task of such a stamp is to fix the date and place of receipt of postal correspondence.

However, some post offices use illustrated calendar stamps that include the original illustration in addition to the date and location. The picture, as a rule, reflects the characteristics of the region or the given post office. Most of these stamps are permanent or have a long term of use.

In the same category, I included illustrated permanent postmark issued for a specific reason, despite the fact that formally they can be attributed to special postmarks. It seems to me that in essence they are closer to conventional calendar stamps due to the long term of use.

The collective name of machine stamps, in which, in addition to the calendar stamp, a plug-in cliche with additional text or drawing of an advertising, less often informational nature was used.

They are widely used in a number of European countries, for example, Great Britain and Switzerland.

A special group is the prints of franking machines or francotypes. Their appearance is due to the large volume of official correspondence, which is sent daily by many large state, commercial or public organizations. In this case, the sending organization concludes an agreement with the post office and receives the right to independently frank its postal items using special franking machines. The impressions of these machines are called francotypes or franking stamps.

The Frankotype is also interesting in that it combines both a postage sign and a calendar stamp. As a rule, a franco stamp consists of three parts: a "stamp" with a denomination in the current currency, a calendar stamp with a date and an information block, usually containing the name or logo of the sender's company and advertising text. As a rule, the francotype is printed in one color, its drawing is rather primitive. The appearance of the francotypes may differ depending on the type of franking machine used.

Currently, various postmarks are quite common collectibles among philatelists. All over the world there are societies and associations that unite collectors of postage stamps, for example, the British Postmark Society (BPS), International Machine Cancel Society, Meter Stamp Society and many others.