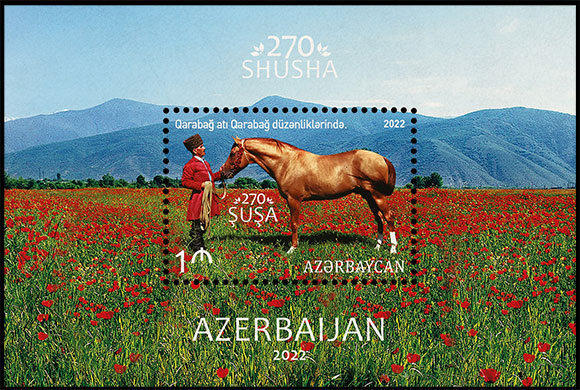 In Azerbaijan, 2022 has been declared the Year of Shushi. Within the framework of this national project, the post of Azerbaijan issued several series of postage stamps under the general title "Shusha 270 years". The stamps of this issue were devoted to the history, architecture, literature, music and ethnic culture of the city, as well as the flora and fauna of Shushi and the Shusha region.

The postal souvenir sheet "Karabakh horse" was also issued as part of the "Shusha 270 years" project. The image of a galloping Karabakh horse in tsarist times adorned the coat of arms of the city of Shusha.

Since ancient times, the Karabakh Khanate has been famous for its horses. It was here that a bright and original breed called "Keglyan" or Karabakh was formed - these light, beautiful, strong horses entered the glorious history of their homeland and left a bright mark on it. The formation of the breed began in the 17th century, continued until the 18th century and took place under the significant influence of Iranian, Turkmen, and then Arabian horses.

Horse breeding traditionally aroused great interest among the Karabakh khans - the best horses were concentrated in their family factories. Breeding of Karabakhs was traditionally carried out by the herd method. Mares almost never stopped by, remaining on pastures all their lives. The foals grew and developed in natural conditions, without losing the strength of the constitution and breed health. The selection of stallions-producers was extremely carefully organized. If the mares could be both purebred "skittles" and half-blooded crosses, then the stallions allowed in the herd were always the best representatives of the Karabakh breed. Largely due to this policy, the breed has retained its originality and unique features over the centuries - the color, exterior and character of a horse worthy of a khan's saddle.

Karabakh horses were valued not only in their historical homeland. In 1869, at the Second All-Russian Exhibition, Karabakh stallions made a splash, being among the winners. Meymun received a silver medal, Tokmak (Hammer) - a bronze one, and the magnificent golden-red stallion Aletmez was awarded a certificate of merit and appointed as a sire to the state stud farms of the Russian Empire. European horse connoisseurs also appreciated the pets of the Karabakh khans - in 1867, at an exhibition in Paris, the golden-bay stallion Khan was awarded a large silver medal.

The modern Karabakh horse is medium-sized, has an average length, sometimes an Adam's apple neck, a deep and wide chest, even, dry legs, strong hooves, and a light body. The head is dry, with a convex forehead, expressive eyes, large nostrils. The predominant colors are golden bay, golden red, and golden brown.

Karabakh horses today are one of the symbols of Azerbaijan. The freedom-loving local horse, original and graceful, best of all embodies the rapid development of this republic, its striving forward and at the same time loyalty to traditions. 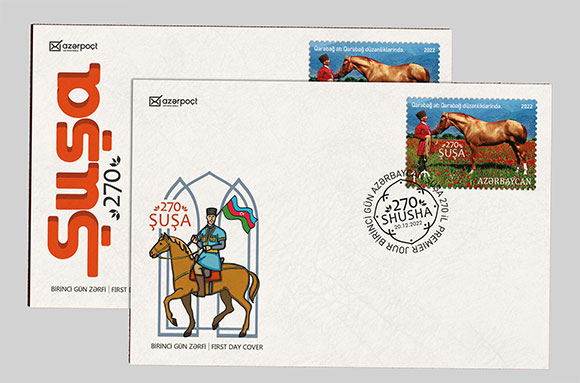