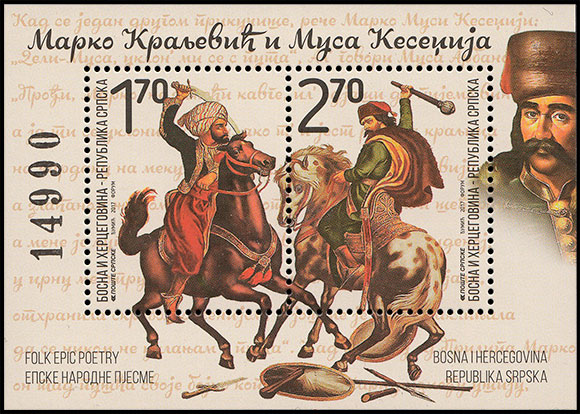 On December the 21, 2017, Serbian Administration of Bosnia and Herzegovina issued a postal block dedicated to the hero of the Serbian epic, Kralevich Marco.

Kralevich Marko (1335 - 1395) - the last ruler of the Prilepsky kingdom in Western Macedonia, self-appointed autocrat of all Serbs. The Prince Marko is the most popular hero of the Serbian epic. In songs and legends he acts as a fighter against the Ottoman oppressors, the people's defender.

Many Serbian epics or heroic (yunatskih) songs, more than two hundred stories are known, the earliest of them date back to the 16th century which is dedicated to Kralevich Marko. In this case, the songs about the Prince Marco do not obey the general storyline, the hero's personality ties them into the poetic cycle.

The epic image of the prince Marko is strongly mythologized and has little to do with the real person, it is a collective image, incorporating the features of many folk heroes.

By the way, in fairy tales about the prince Marco there is an interesting hippological plot. The invariable companion of the hero was his mighty piebald horse Sharac, with whom Marco always shared meal and wine, and loved him more than his brother. The horse could speak in a human voice and jump three lengths of spear up and four spear lengths ahead.

For the design of the postal block, a picture of the well-known Serbian artist Vladislav Titelbach "The King's son Marko and Musa Razboinik" (1900, People's Museum in Kikind) was chosen. 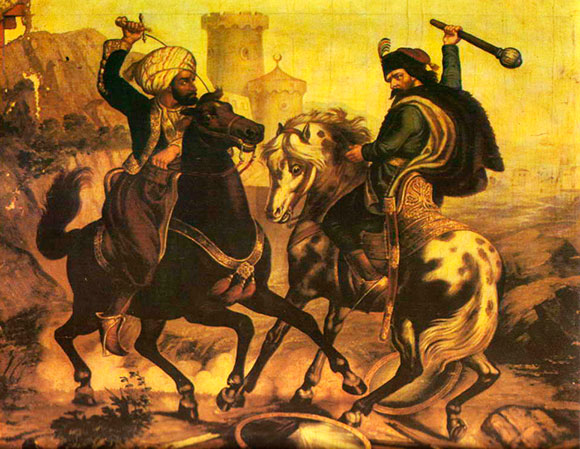 The picture illustrates the well-known epic about the battle of the prince Marco with the robber Musa, who ravaged the surrounding lands.

Vladislav Titelbach (1847 - 1925) was born in the Czech Republic, but in his youth moved to Serbia and lived there all his life. The artist traveled extensively throughout the country, actively engaged in collecting ethnographic materials about the Serbs. He left behind him a large number of sketches, drawings, engravings, watercolors and paintings dedicated to the life of Serbs of the late 19th and early 20th centuries, the folk traditions and creativity of the Serbian people.