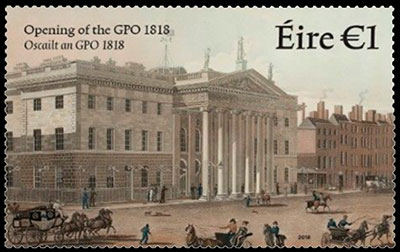 20.01.2018
This year sees the bicentenary of the opening  of probably the best-known building in  Ireland: The General Post Office (GPO) in Dublin’s O’Connell Street. The GPO opened for  business on January 6, 1818 when O’Connell  Street was then called Sackville Street.

The building was designed by architect  Francis Johnston and was the last of the great Georgian public buildings to be built in Dublin.

Almost 100 years later, in 1916, the Easter  Rising took place, with Dublin at the epicentre  of the fighting. The leaders of the rebellion set up headquarters in the GPO and read the Proclamation of the Irish Republic. As a result, the GPO became the focus of  the ire of the British government and it was  heavily shelled before burning almost to the  ground. All that remained was the façade of the building and it lay in ruins until the Irish  Free State government rebuilt it years later.

In 1911 a statue depicting the death of the ancient Irish hero Cú Chulainn was sculpted  by Oliver Sheppard and was sited at the command post in the centre of the GPO main  hall. Later it was moved to the front of the  building, where it still stands. The building will always hold a very special place in Irish history and its story is well  known among people of all ages in Ireland.

The stamp was commissioned to commemorate   the bicentenary of the opening of the GPO. It features an image of the GPO which was engraved by Robert Havell and Son and published in 1820 by G.H. Jones.