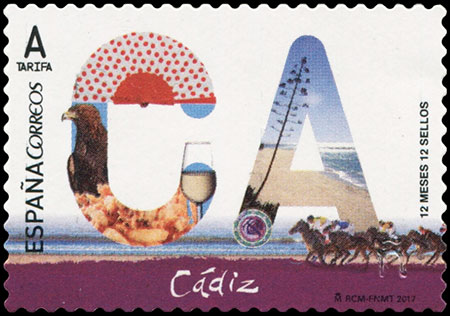 In 2017 Mail of Spain launched an interesting series: "12 months, 12 marks." Every month a stamp was issued in circulation, dedicated to a Spanish province.

The designers faced a challenge: to reflect the entire region of the country in a small piece of paper. A very original graphic solution was found - letters (region symbols on car plates) are collages made up of photographs of the main sights or characteristic features of the region. 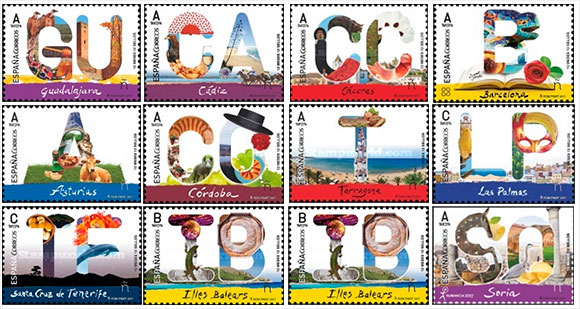 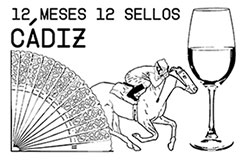 In February, the "main character" of the issue was the province of Cadiz. What is encrypted in the letters "SA", what is the glory of this the southernmost region of Spain? The letter "C" is a fan that saves from the heat and the golden eagle that is found in these places, it is seafood fried in flour and a glass of excellent, world-famous sherry. The letter "A" is decorated with one of the most attractive corners of the Spanish coast, the beach of Canos de Meca.

And horses are galloping fast from the right lower corner of the postage stamp along the light sandy beach.

Horse racing on the beach in Sanlúcar de Barrameda

Sanlucar de Barrameda - a small town in the province of Cadiz, is famous for its unique horse races, which have been held there for more than 170 years. The first time the beach of Sanlucar was the venue for horse racing in the distant 1845.

Today thousands of tourists come here every year to see, perhaps, the most extraordinary horse race. At low tide the sandy beach at the very edge of the water turns into a race track, where the best Spanish horses compete. 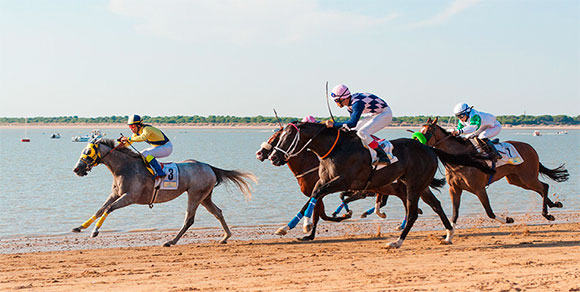 Moreover, the races in Sanlucar de Barrameda, in spite of the beach entourage and external frivolity, are not just entertainment for tourists, but quite full official equestrian competitions entered in the national racing calendar of Spain. The races are held in August-September in two series. Horses overcome distances in 1400, 1600, 1800 and 2000 m., at the same time the start is made as at any racetrack - from the usual starting boxes, they are specially brought to the beach on the day of the race. Despite a small prize fund, the horse races are very popular among Spanish jockeys, coaches and horse breeders. And, of course, they arouse genuine interest among the audience.

All year round on the city beach of Sanlúcar de Barrameda you can see how the local people and tourists bathe and sunbathe, children play and build sand castles, small boats swaying on the water - a habit familiar to any coastal town. The most interesting thing is that you can see exactly the same picture on the day of the races.

And only after dinner, about 16 hours the future "hippodrome" is fenced with a purely symbolic fence from a low net and the beach is filled with spectators and fans who came to the races. And a few hours before sunset lovers of equestrian sport observe a spectacular in its beauty and expressiveness sight considered to be a landmark of the province of Cadiz and all of Spain. 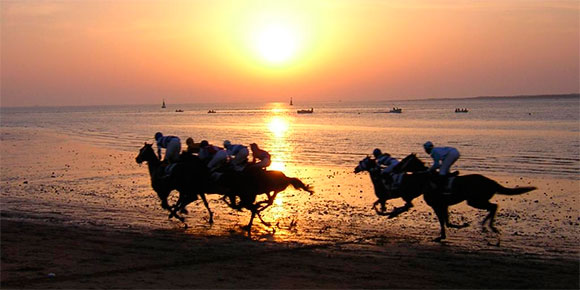