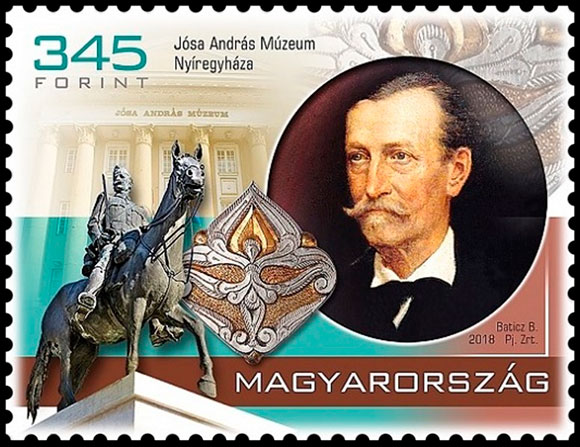 On June 1, 2018, the Hungarian Post released two new stamps as part of the ongoing series «Treasures of Hungarian Museums».

Museums are a special world. All of the museum’s exhibits - works of art, ancient household items, or archaeological finds and artifacts, were once part of the life of our ancestors. In museums, there are beautiful, interesting and amazing things that allow us to look into the past. Issues of postage stamps devoted to museums show the thematic variety of museums in Hungary, the richness of their collections and expositions.

Stamps of the new issue are devoted to two museums: the Andras Josa museum in the city of Nyiregyhaza and the Kekfeshto Museum in the city of Papa.
On a postage stamp with a nominal value of 345 forints, artist Banrabas Batic (Barnabás Baticz) reproduced the portrait of the founder of the museum, doctor Andras Jos (1834-1918), the facade of the museum building and the equestrian monument "Hungarian hussar".

The Andras Josa Museum, a municipal museum of Szabolcs-Szatmar-Bereg county, was founded on December 1, 1868, thanks to the efforts of Dr. Andras Josa, who lived in 1834-1918. - a passionate collector and archaeologist. The museum is known for its impressive collection of archaeological finds from various historical periods, as well as a rich ethnographic collection. It also contains materials on the history of the region, historical literature and archival documents. The museum has a permanent exhibition dedicated to the work of two Niregyhaz cultural figures: the artist Dyula Bentsur (1844-1920) and the writer Dyula Krudi (1878-1933).

It worth mentioning that the exhibition, which is dedicated to the history of the hussar regiment lodged in Nyiregyhaza. Hussars became an integral part of the life of the city in 1869, when the hussar detachment of the Hungarian Royal Army was stationed in the city barracks, in 1891 new barracks were built to accommodate a full hussar regiment. Since then, hussars have played an important role in the social and economic life of the city right up to World War II.

In 1997, the Monument in honor of the fallen in World War II, better known as the Hungarian Hussar, was erected on Orsagzaslo Square. The author of the composition is the famous Hungarian sculptor Sandor Gyorfi (Sándor Györfi). The bronze statue shows a hussar on horseback during a parade, his head turned to the right, and he holds his sword on his shoulder. The high pedestal is decorated on two sides with bronze bas-reliefs. One bas-relief depicts the attack of the hussars of the Napoleonic wars, the second - the last departure of the hussars to the front in the summer of 1944. In the background on the bas-relief you can see the image of the hussar barracks in Nyiregyhaz. 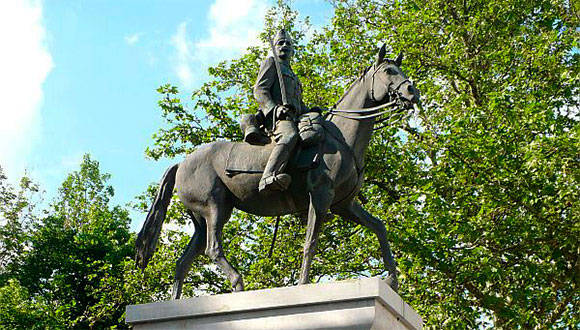 The Hungarian cavalry had rich fighting traditions, almost all European armies of the 19th century had hussar regiments, the word hussars, as well as this branch of service has Hungarian roots. During the First World War, the hussars actively participated in hostilities, carrying out reconnaissance, covering the flanks, and pursuing a retreating enemy. They also participated in the Second World War, although at that time dashing saber attacks and hussars were using modern methods of conducting cavalry combat, organizing ambushes and sudden strikes from hidden bases.