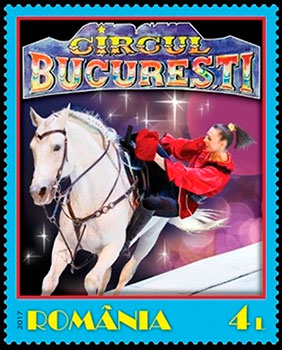 On November 6, 2017, the post office of Romania issued a series of 4 stamps dedicated to the Bucharest circus.

With a history that has its roots in Antiquity and spectacularly evolving over time, the circus signifies that wonderful childhood performance that reunites true artists under its dome.

One of the pioneers of the modern Romanian circus was Theodor Sidoli, an Italian settled on our realms, that distinguished himself and became really famous especially by his act of horseback riding. In 1874, on the site of the current Gambrinus Brewery, Sidoli opened the first professional local circus under the name of The Sidoli Circus.

From its first expressions to the present day, the circus has experienced not only years of glory but also very difficult years, especially during the period of the two World Wars. The year 1954 represents an extremely important moment in the evolution of the Romanian Circus – the establishment of the State Circus.

The current headquarters, built at 1960-1961, creation of the joint effort of the architects Nicolae Porumbescu, Nicolae Pruncu and Constantin Rulea, was declared a historic monument in 2010. The building, a modern assembly composed of central ring and annexes, is covered with a reinforced concrete dome in the form of a waving tarp. The central ring is concentric in shape, so that the circular arena with a diameter of 13 m captures all the spectators’attention.

Regardless of the name today the Bucharest Metropolitan Circus under its dome over time evolved a series of remarkable artists – acrobats, illusionists, comedians, trainers – who, by passion, hard work and talent, created complex, modern, bold and exceptional performances, pantomime, extravaganzas, classical characters and new comedies, spectacular acrobatics, thus contributing to the inclusion of the Romanian Circus into the elite of the world circle and meeting the exigencies of all categories of spectators.

The stamp with the face value of lei 3.50 illustrates the poster of a 1995 show.

The stamp with the face value of lei 4 illustrates a horses’ show.

The contortionist acrobat is illustrated on the stamp with the face value of lei 4.50.

On the stamp with the face value of lei 15 is a clown, the representative image of the circus.