On October 10, 2017, the Portuguese Post issued a set of 6 stamps and a souvenir sheet in honour of the 500th anniversary of the Postal Service of the country.

Each stamp is dedicated to historical figures who made a significant contribution to the formation and development of Portuguese mail. The background for portraits is the means of mail delivery from the 1520s up to the present day.

On the stamp with the portrait of Luis Gomes da Mata, the first postmaster appointed in 1606 by King Philip II, as a background image was used a fragment of the painting "Mail on foot and horse - 1520" by the Portuguese artist José Pedro Martins Barata, written by him in 1962. The picture depicts the mail messenger of the newly created mail "Correio-Mor" hands a letter to Luis Gomes da Mata.

By the way, the artist Jose Martins Barata previously cooperated productive with the post of Portugal: according to his sketches in the period from 1960 to 1990, more than 50 series of postage stamps were issued.

On the stamp with José Diogo Mascarenhas Neto, as a background image, was used a fragment of the painting "Mala Posta - 1798" (Diligence post-1798) by Jose Pedro Roca, made by the artist in 1963.

"Mala Posta" - mail, using for transportation of mail and passengers, steam locomotives came to replace "Correio-Mor" in 1798. Mail, being formerly privately owned by individual aristocratic families, was transferred to state control. The first route of mail coaches was organized from Lisbon to Coimbra and covered 125 settlements. 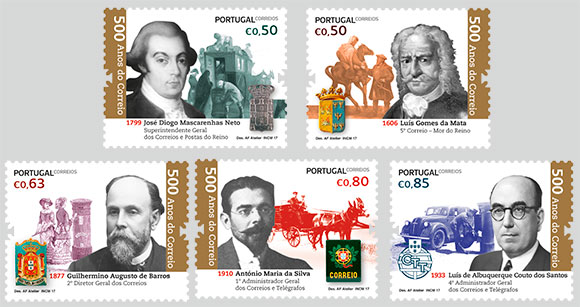