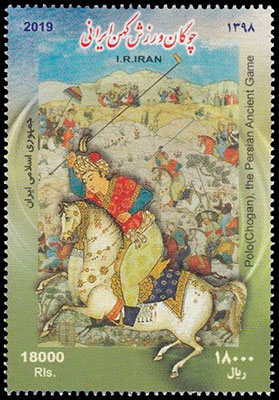 On August 16, 2019, the Iranian Post issued a stamp dedicated to the ancient Persian game of Chovgan - the ancestor of equestrian polo.

The stamp is based on the work of the famous Iranian artist, Hossein Behzad (1894 - 1968). He was a talented painter of miniatures of the 20th century, the creator of a new style of Iranian miniature. In his youth, Hossein was an apprentice portrait painter, and from the age of 18 he began to work in his own workshop, doing custom-made copying of old miniatures from the Safavid and Timurid dynasties. The artist thoroughly mastered the style and techniques of the old masters of Persian miniatures, his work was so skillful that few could distinguish a copy from the original.

During his creative career, he created many paintings and miniatures, including illustrations for the poetic works of Nizami, Ferdowsi, Hafiz and Omar Khayyam. Contemporaries described Behzad's miniatures as "poetry in painted images." In the 1950s, the name of Hossein Behzad became world famous thanks to a number of exhibitions in London, Boston, Paris, Prague, Washington, New York and Brussels, as well as in India and Japan. Hussein Behzad breathed new breath into the dying Persian miniature, creating three new styles, enriching ancient art with a new approach to the use of paints. He is considered one of the few Iranian painters who was able, fruitfully working with traditional Persian miniatures, to have his own style, partly built on the experience of Western masters. 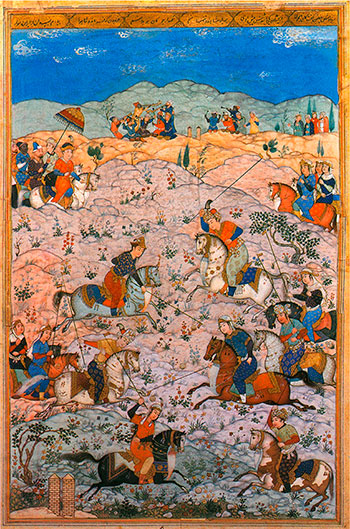 I could not find the information whether the miniature "Playing Polo" is an independent work or is an illustration for a book. Perhaps this is one of the illustrations for the "Shahnameh" by Ferdowsi. The famous Persian poet and historian, who lived at the turn of the X-XI centuries, in his epic work “Shahnameh” (“Book of the Kings”) describes several royal Chougan tournaments.

Polo (Persian "chovgan") - an ancient Persian game that appeared in the 5th century. BC. (and, possibly, earlier) - the Achaemenids played it. This is a team sport with a ball, in which participants play on horseback and move the ball around the field with a special club. The goal of the game is to hit the opponent’s goal the most times. At first, polo served as a training game for cavalry units, usually for the royal guard or other elite troops. The warlike representatives of the nomadic tribes arranged a “miniature battle” from the “Chovgan”, up to hundreds of athletes appeared on each side. Gradually, polo became the Iranian national sport, in which the aristocracy invariably participated. Moreover, both men and women could play polo - there are references to how the Queen and her retinue played with Tsar Khosrov II Parviz and his courtiers in the VI century AD.

The heights of the development of "Chovgan" was reached during the rule of the Safavids. Shah Abbas himself was a passionate polo player, and even before moving to his capital, Isfahan, he often played in Qazvin. The famous Nagsha-Jahan Square in Isfahan (Shah Abbas I built it in the 17th century), inscribed in the UNESCO Cultural Heritage List, is actually a polo field that the Shah could watch from the balcony of his palace. Even today, on both sides of the square you can see tall pillars of an interesting shape - once they served as a “gate” for the courtiers who played “Chovgan”.

During the Mongol rule, Iranian culture and art, including the Chovgan game, spread to the countries of East Asia subject to them, including India.
The British, colonizing India, became acquainted with this game in Calcutta and the British officers liked it. Since 1862, the British began to hold the all-Indian polo championship where both Indians and English participated. The close relationship between Britain and India led to the fact that the game of polo appeared in the metropolis and became extremely popular in England in the second half of the 19th century. In 1871, the first polo competitions were held in England. Following this, the game of polo became widespread in the Americas and further around the world. Today, professional polo player associations exist in 16 countries. 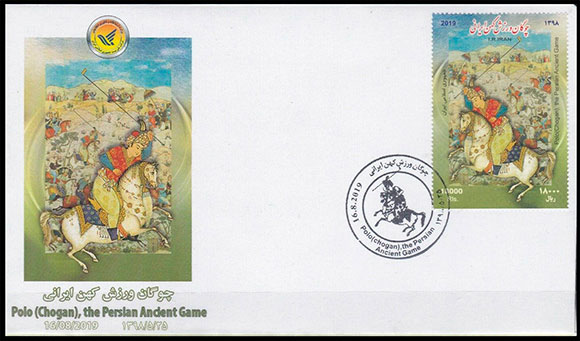