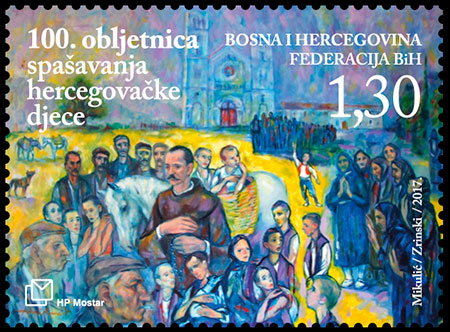 On September 5, 2017, the post Mostar issued a postage stamp for the 100th anniversary of the rescue of the starving children of Herzegovina. Franciscan monk Didak Buntić organized the resettlement of more than 12 thousand children from Herzegovina, where was a severe famine in the eastern regions of Croatia in 1917.

Friar Didak (Franjo) Buntić was born in Paoča on October 9th 1871. A fransiscan, priest and humanitarian that selflessly took effort and gave his whole self for the well-being of his people. He was prominent with his spiritual, pastoral, educational and pedagogic, diplomatic and political, humanitarian and voluntary work. He died in Čitluk on February 3rd 1922.

The famine that hit Herzegovina in 1917 to 1918 was catastrophic. Death took upon all the more and more people, and children were the most vulnerable. Desperate because of the fate of his people friar Didak Buntić seeks help everywhere. Opens up a kitchen for the poor, seeks assistance from government authorities, and even seeked help at the Viennese court. Realising that no assistance will come, with firends from Croatia undertakes an incredible venture. The project of rescuing thousands of starving children to be fostered into families, mostly in Slavonia and Srijem. Children were put into special trains and travelled from Mostar to Bosanski Brod where families welcomed them. The first train with starved herzegovinian children in it departed from Mostar on September 10th 1917. Other trains followed, and the last one was probably on May 9th 1918. There are many testimonies about the generous caretaking of children in Slavonia. And there were not only Catholic children that had went to Slavonia to survive, but also children of other religions and nationalities had been rescued as well. Friar Didak with this venture did the impossible and rightfully deserved to be called „the Saviour of the Poor“.

The Croatian Post Ltd. Mostar has issued a commemorative postage stamp in a sheet of 8 stamps, a postmark and First Day Cover (FDC).