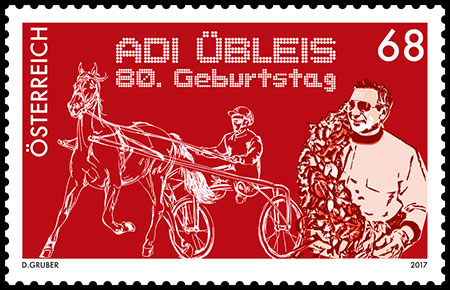 16.11.2017
The Austrian Post congratulates the trotting legend Adi Übleis on his 80th birthday with a special stamp issued on November 10, 2017. 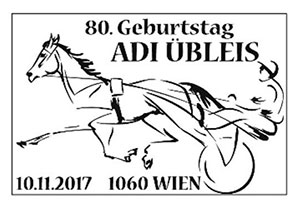 Adi Übleis was one of Austria's most successful trotting competitors and many know his name even though they are not interested in equestrian sports. The special stamp shows the sulky of a harness racing driver and the exceptional athlete Adi Übleis in a familiar pose: with a wreath for a victory won.
On the day of issue, the special post office will be cancelling this special-issue stamp with the special first-day postmark.

Adolf “Adi” Übleis was born on 10 November 1937 in Thalheim near Wels in Upper Austria as one of ten children of a haulage contractor. The father had horses for his car, but Adi was not interested in the first and made an apprenticeship as a car mechanic. Nevertheless, he eventually took as a young amateur instead of trotting in Wels and took contrary to expect favor.He quickly celebrated his first successes and was hired as a coach. In 1964 he moved to Vienna and became more and more successful in the Vienna Krieau. He settled in Baden near Vienna and met Herta there. In 1967 he got married. In 1970 he won the first of nine championships with 105 wins and with the stallion Big Ben the Austrian Derby, which he won four times. In 1971, he was victorious at the European Championships in Germany and then at the World Championship of the trotter racers in the US, where he drove his competitors on and off. In 1974 he was again able to win the European title in Vienna. In the 1970s and 1980s, he was one of the best and with his horses such as Big Ben, Volcano, Action Française and Mick Dundee numerous victories. By the end of his career in 2007, when at age seventy he was not allowed to race trotting, he won around 3,500 trotting races.

Even in retirement, he still deals with horses, including on the trotter stud of the family Übleis in Leobersdorf or as honorary president of the Baden Trabrenn club – in Baden, where he also found his home, he celebrated much of his victories. Today, there is the Adi-Übleis-Allee – of course at Trabrennplatz Baden – named after him.